To kick off my eLC travel adventures last week I decided to head to Shebandowan Lake Sunday evening, since I had a Monday morning flight booked out of Thunder Bay. The solo drive was pleasantly uneventful and it gave me a chance to listen to a number of TEDTalks podcasts on my iPhone. The one that resonated the most with me was David Grady: How to save the world (or at least yourself) from bad meetings.


Feb 9th
Well rested and enjoying a cup of coffee at YQT from Tim Horton's who, by the way, had shot a commercial in my town late last year.

I fired up my laptop in an attempt to take care of a few items in my inbox. Since I was going to be offline for a couple hours I stashed a math article into iBooks that I had been emailed, knowing it'd give me something to pore over during my flight. I also Tweeted this in an attempt to make visible what lengths some of us go to in our attempts to juggle home and work.

On my way through security I was randomly selected for the full screening which meant I was given the choice of either a full body search or getting scanned in the tube...cool! I've never been selected for this before so I chose to try out this scanner thing, and to be honest I was really let down. After the scan, the security agent summoned me out and told me to look at a screen which didn't show anything :( I guess I was anticipating a Total Recall kind of full-body skeleton x-ray. While in the air I had time to "read" the youcubed math article and compose a response by way of blog post on my iPhone. The rest of the day was spent planning SeLNO,  connecting with other eLCs from the North and coordinating the TELT school visits for the next day.

Feb 10th
I felt very privileged to spend the day in the HWDSB enrichment program's learning space led by Zoe Branigan-Pipe and Beth Carey http://360.io/rP6xeb. What impressed me the most, even more than how comfortable and inviting the class felt, was how integrated the use of technology was for the learners. While everyone was getting connected, one student was happy to teach me some cool online tricks like Google Gravity, and how to customize the Google homepage with code (which he learned "just by messing around"). Once the students had access to the class Google doc via "The Hub" they were off to the races, researching, reading, and discussing what they learned about the oil sands as "local global citizens" in preparation for their debates. The process of how they developed their team's position was fascinating as they bounced back and forth between creating their arguments independently in a shared document, and working together to organize and critique what they came up with, which included assessing the validity of information from various webpages. Setting up the shared document as a table so that each group member had their own cell to compose in was an excellent strategy to keep content organized with simultaneous authoring.
Although the room was littered with examples of various other forms of technology, from a turntable to tablets, from Legos to a Makerbot, it was apparent that these tools weren't what drove the instruction, rather it was that the technology was used to foster their inquiry. Having an extended period of flexible time (other than using the gym) with the students, allowed for the teachers to go much deeper with the student learning rather than trying to fit everything into a specific schedule or bell pattern.


Feb 11th
Rather than going deep with one class, day 2 was an opportunity for me to experience a wide variety of Technology Enabled Learning and Teaching from SK to grade 8 at two different schools. On our way to Dr J Edgar Davey Elementary School we leveraged our connectedness to social media and picked up a coffee for our gracious host ;)


I'm having an @shareski moment: T-6 minutes until the eLCs arrive, & I spill coffee right down my shirt. #GoodJobAviva
— Aviva Dunsiger (@avivaloca) February 11, 2015

The first room we were in was an excellent demonstration of a variety of iPad apps with a small group of ESL SK students. The students explored letters, sounds, pictures, and stories independently and as a group with the support of the teacher. What I really liked about the apps was that they gave the students instant feedback. For example, when drawing letters they had to be constructed from top to bottom (something that is/was a struggle for me), and if a student was having difficulty it was easy for the teacher to see this and then provide support as needed.

Next, we observed a grade 5 math class of which I have mixed feelings. Not about the class itself, which was fantastic, but about the effective use of technology in math. Personally I prefer DOING math using pencil and paper, where I can quickly (and messily) sketch, scrawl, and revise my thinking as I struggle though a problem. I find drawing and writing to be much more challenging on a device which then makes the problem solving process more time consuming, as well as limiting to creativity. However, we did see some ways that the technology can be a huge asset, like when the students who were using Explain Everything recorded their voices to describe their thinking as they solved the problem, and then submitted a digital copy to their teacher. I guess my ideal math class would be a blend of high tech (sharing work, recording thinking, Desmos) and low tech (pencil & paper, concrete manipulatives).

After the nutrition break we went into Aviva's grade 1 class, which I have already enjoyed visiting daily through her Twitter feed and blog posts. The biggest takeaway for me was how fluently she used technology to document both instruction and student learning. Snagit was used to record the rich discussion with the class at the SMART Board surrounding their structure problem, iPads captured their progress in pictures and videos, then through a mix of Twitter, WordPress, and YouTube all of their learning is shared with the world. In her reflection about the day Aviva came to the conclusion that "maybe the most valuable 'resource' that we have in the 21st century classroom is 'time.' with which I wholeheartedly agree.

Anne and I then ventured off to Ancaster High School to join a few other eLCs in a couple intermediate science classes. I was really curious to see what a school of 300 grade 7 & 8 students with BYOD and a 4-1 ratio of school devices would look like, but to be honest it was very similar to what we have going on in a few of our schools. I spent some time talking individually with students as they worked on their labs, and it was Google Drive that seemed to be the most valued tool for the students. Using it meant that students always had access to what was going on in their classes (even if they were absent), it allowed students to collaborate at school or abroad (unless they are visiting a country that filters Google), and it was an easy way for them to submit their work.

To cap off the day we were treated to an open discussion with a group of students about the use of technology in their school. It was interesting to hear them offer solutions to most of the problems that we encounter as we become more reliant upon being connected to the internet and our devices. Some of their suggestions included:
-printing off study notes before tests
-store vital content locally on the device as well
-continue printing and handwriting as a skill
-read books to gather information
-take time away to detach yourself periodically from your devices
-develop social skills like being able to have a face-to-face conversation
-students will take more ownership if devices are 1-1 instead of shared
-for some classes technology isn't always an asset eg: math work
And like most of the teachers I know, their biggest technology request is for faster, more reliable internet access.


Epilogue
Well my journey home Wednesday evening didn't exactly go as smoothly as my travel to Toronto. After bypassing the massive security line thanks to my Nexus card :) 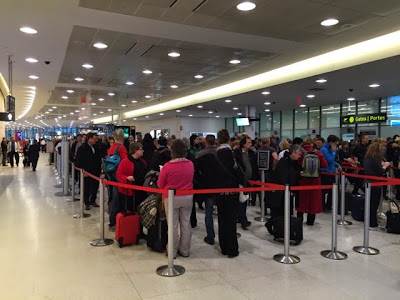 I grabbed a bite to eat and charged up my phone. En route to my gate I checked the board only to discover that my flight was going to be delayed by a couple hours. After FaceTiming (is that a word now?) with my wife and kids I decided to try and make the most of my time at YYZ by having a little fun on Twitter with what I could discover in the airport. I also found a unique Estimation 180 problem, and finished recording the video I needed for my moving sidewalk math lesson. The next morning, on my way to Atikokan High School, I couldn't pass up the opportunity to stop and snap this pic as the sun rose over the height of land hill. 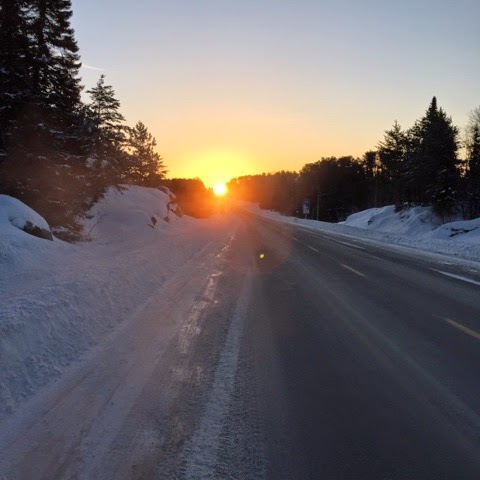 Even though I had a terrific experience in Hamilton, it felt great to be heading home.

Email ThisBlogThis!Share to TwitterShare to FacebookShare to Pinterest
Labels: Reflection